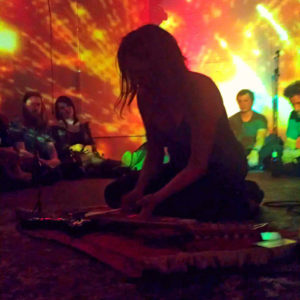 My Bandcamp site has all my recent music and my CNLF cassette and vinyl album archive available for free streaming or download.

Gigs
Wayward in Limbo #109 – April 30, 2021
Veteran improvisor Sue Ann Harkey goes back to her solo prepared guitar roots on that $50 electric 12-string she bought over 40 years ago. Each piece is a change in implementation on an open-tuning that can do no wrong. Here is a repertoire of sounds drawn from the intimacy she has with her instrument and her proven experimental approach.

Articles
The Stranger – Slog – Dec. 20, 2017 Lost Classic Album Alert—Sue Ann Harkey’s The Ancient Past and the Ancient Future Are Both Seconds Away

Hollow Eartth Radio The Sea-Port Beat: The Independent Music Legacy of The Pacific Northwest
Listen on Soundcloud – Episode 6: The Domestic Art of Home Recording: This episode is simply about home recording. You’ll get a peek into the recording life of Anacortes musician, Karl Blau, as his process of a recording a song is documented. Another segment focuses on musician, Sue Ann Harkey, as she describes her experience with starting an in-home recording label. (Kenneth Piekarski, Episode Producer)

UNSOUND REDUX is a series of four films from Talk Story Films inspired by Unsound magazine that was published in the 1980’s.